On August 2, 1940  the submarine HMS Oswald of the British Navy colliding with an Italian destroyer, Vivaldi, and due to the  extensive damage the commander, Captain Fraser decided to abandon ship.

As their ship disappeared beneath the water for the last time the crew gave three cheers and after   two and a half hours in the sea the 52 crew members (three unfortunately perished) were taken onboard  the Italian destroyer, given food and blankets and brought to a naval hospital in Taranto. 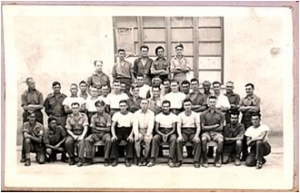 The surviving seamen were soon moved north to the island of Poveglia near Venice where they worked on  road repairs and in gardens. A few months later, in October, they were  transported by train to the  Fonte D’Amore camp Number 78, located three miles outside the  mountain town of Sulmona in the central Abruzzi region.

Illustrated prison log books kept by some of the men describe their travels and how Italian soldiers with fixed bayonets guarded them when their train stopped at  stations along the way. They showed their humanity when  they also allowed the prisoners to catch bags of sweets thrown to them by the people.

In Sulmona,  the prisoners  passed the  time drawing  pictures and graffiti which  can still be seen  on the  barrack  walls  but when  winter arrived in the Abruzzi mountains, the scantily clad English  suffered terribly from the cold. In order to  keep their feet from freezing  they tied wood to the soles of their boots and fashioned socks out of sheets. 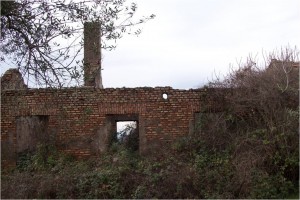 Escaping was never far from their minds, but successful escape attempts made life harder for those who remained behind for contrary to the Geneva Convention, collective punishment such as food reduction  was usually given after a successful getaway.

After an escape attempt that failed at the last moment, Seaman Edward Penny volunteered in June 1942  for a  work party and with 200 fellow prisoners soon found himself in Vetralla, 68 kms north of Rome. Here he learned more  of the  Italian language and worked as part of the  building crew  in the creation of a large, new camp for captured Allied military prisoners.

A Swiss delegation document  testified that  the prisoners were allowed relative freedom at the Vetralla camp and could take  walks in the countryside which often lasted from morning to  evening.  This gave the British prisoners  ample time to make friends with the local people, exchange  food and other goods with them and to participate in the  local life.

According to the Ministry of the Interior’s report conserved in the Italian State Archives, Seaman Penny escaped from the camp after stealing a bicycle and  travelled to the Vatican, the closest neutral state,  where he asked for help. The Italian Ministry’s  report  (306274.53 of  Oct 13, 1942-the 20th  year of Fascist government) says that he would be  turned over to the Italian authorities and would be consigned to a camp representative to be returned directly to the  camp in Vetralla.Official  English Naval   documents conserved at the Portsmouth Naval Museum tell  the real  version  of Seaman Penny’s  imprisonment and escape.  Using his newly acquired  language abilities Penny narrates that he befriended local workers  employed at the camp and after finding and  repairing  an old blue overalls similar to those worn by the local plumbers,  he darkened his hair with soot, pencilled  his eyebrows and was able to walk out of the camp dressed like one of the workers. Exchanging  his watch for a bicycle  he cycled  the 68 kilometres to Vatican City gates where  he was taken in by the resident British Minister and stayed there as his guest  until he was flown out of  Rome  to  Britain   on January 3, 1945.