The Renaissance countess who ruled Vignanello with  an iron hand and dispatched three  husbands when they were no longer wanted or needed, has been considered one of history’s most heinous women. Now, after more than 500 years, Ortensia Farnese now has a face to go along with her reputation. 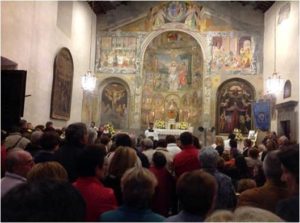 Thanks to the restoration and cleaning of  frescoed walls  in the tiny  14th century  San Pietro church (also known as the Madonna del Riscatto/ Ransom) Ortensia’s face is now visible in  two separate  portraits .

Learn the entire story of this Renaissance woman, her  terrible fame and how her forgotten face and story have been re-discovered in a tiny church in the town of Vetralla.  An entire chapter  of “The Painted Palazzo” is dedicated to this story. 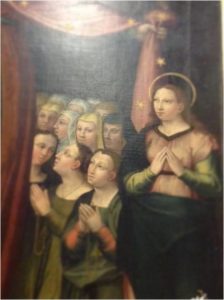 Just Released   Audio Guide Stories and Secrets of Viterbo https://voicemap.me/tour/viterbo/stories-and-secrets-of-viterbo a 40 minute narrated walk through the historic center of Viterbo and  the medieval quarter of San Pellegrino Download to your smartphone  from voicemap.me   and Read more…

Il Palazzo Dipinto/ The Painted Palazzo  is the  latest volume  about  the Tuscia Viterbese    by  journalist and historian Mary Jane Cryan .   It contains  new research  uncovered in the last few years, in  English Read more…