Author Mary Jane Cryan presented   “In Carrozza con il Cardinale”  based on the diaries of Cardinal Henry Stuart and her book “Travels to Tuscany and Northern Lazio ”   March  22, 2019 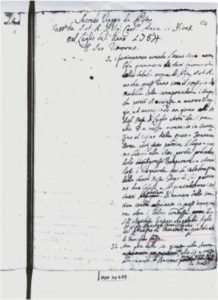 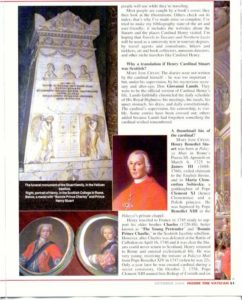 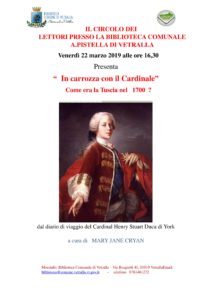 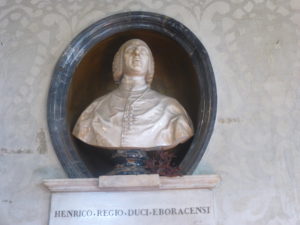 Jacobite fans came to Rome for  a 4 day conference and tour following in the footsteps of Cardinal Henry Stuart . Mary Jane was invited to  present  an illustrated lecture on the Cardinal’s Diaries which form the basis for her   book “Travels to Tuscany and Northern Lazio” .

Among the attendees Prof. Edward Corp and Elizabeth Corp (far left of the photo), Brian  Whiting editor of the Jacobite  review  and organizer  Benedicta Froelich. 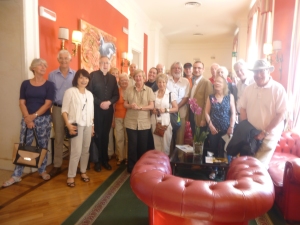 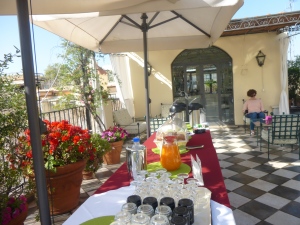 This historical «on the road» is based on the travel diaries of Henry Cardinal Stuart and other historic travellers to central Italy.  A precious instrument for art students, historians who like to travel and for travellers who enjoy history, this book shows what Tuscany and northern Lazio were like in the 1700s.   Rare, previously unknown descriptions of towns, travel and life in 18th century Italy. -Valuable primary sources for scholars and a compelling blueprint for today’s travellers, leading us to re-discover forgotten monasteries, villas, spas, and art treasures that are usually overlooked by modern travellers. 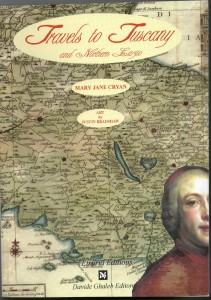 Discover what Siena, Pisa, Lucca and Bologna were like in the summer of 1763. The 1764 voyage included Florence where the Cardinal admired palazzi, churches, villas and gardens.

…A fascinating picture of a royal progress … the reader is tempted to jump on the next plane to Rome and retrace the Cardinal’s footsteps, book in hand.    A book that will be welcomed by anyone interested in the Stuarts, in 18th century travel in Italy, in Catholic ritual and in the relatively little-known area of northern Lazio. The author also gives thumbnail sketches of the towns for the present-day visitor. There are excellent footnotes, a glossary, a bibliography and a list of websites. The book is beautifully illustrated with a mix of contemporary engravings, photographs, sketches and maps by Justin Bradshaw.       Jane Clark, Royal Stuart Review 2005

3 COPIES  OF THIS BOOK   still available

you can find copies at the Anglo American Bookshop in Rome

order directly  from this website , buy it on my ebay page  or send an email  to macryan at alice dot  it

A glimpse of 18th century travel as experienced by high ranking ecclesiastical authorities and noblemen. The heart of this thoroughly researched and well- documented book is a travel diary kept by Don Giovanni Landò, secretary to Cardinal Henry Stuart, Duke of York who made three trips to Tuscany and Northern Lazio– Cryan has done a fine, very readable translation of Landò’s prose.

Not just a specialist’s book. The diary’s minimalist portrayal of ordinary life will exert its fascination on modern day travelers. Departure times and arrivals are meticulously noted and we learn how long it took to ride from one post station to another. There are descriptions of churches visited and of the treasures and reliquaries they contain, as well as of the sumptuous food served at banquets — the Cardinal enjoyed game, gelati and chocolate. Gifts given and received are recorded — money, jewels, and food.
In addition to the text of Landò’s diary, previously unpublished in any language (the second part of the book contains the full text in Italian) Cryan provides a wealth of historical information to help set the scene: maps of the Cardinal’s itineraries, old prints of the areas visited, period illustrations of vestments and clothing, even a bill for the repair of a carriage. She explains how to tell time using the antique Italian system, and how to convert antique measuring units into meters. She lists by name the 76 members of the Cardinal’s traveling party, which included sweepers, porters, stableboys, a doctor, wardrobe attendants, cooks, and musicians and provides a list of prices for basic necessities from the local grocer. These practical details, often overlooked by studies of larger canvas, are the stuff of historical reconstruction which allow the reader to have more tangible sense of daily life in a remote era.
A brief chapter of other travelers to the area completes the volume, along with a description of the places visited on the Cardinal’s three journeys as they are today.

Mary Jane Cryan makes her home in Vetralla, a town in Tuscia, a unique corner of Italy, nestled between Rome and Tuscany in the rustic and unspoiled natural setting of the Cimini Hills. Thoroughly acquainted with the history and culture of the area, she has dedicated a decade to ferreting out its hidden history. Lying between the greater area of Rome and the Val d’Orcia, the towns of the Tuscia have always served an important function as rest stops along the old pilgrims’ road to Rome. Kings, cardinals, pilgrims, intellectuals, writers and painters – from Turner to M.C. Escher, from Edith Wharton to D.H. Lawrence, have trod these roads. In retracing the steps of travelers throughout history to the Tuscia , Cryan has helped fill in a blank space on the map of the Grand Tour, for much documentation still lies buried in archives. Her books are a mine of information, anecdotes, and curiosities for all those interested in delving deeper into the history the area.                                                           Prof. Linda Lappin, Tuscia University

for up to date info 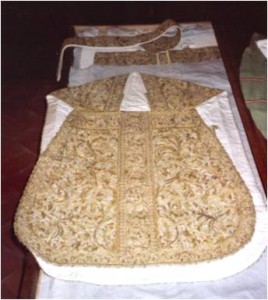 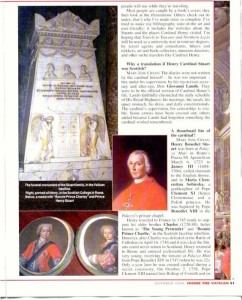 This book is a quite fascinating account from the diaries of Henry, Cardinal Duke of York, kept by his indefatigable secretary, Don Giovanni Lando, extracted from the 36 volumes of the diary, bound in brown leather and stamped in gold and now held in the British Library. These volumes were acquired in Rome in 1842 by Baroness Braye of Stanford Hall, and placed in the British Library in 1877. Mary Jane Cryan has extracted and translated accounts of three jaunts by Cardinal Henry to Pisa in 1763, and again in 1764, and to Viterbo and Orvieto in 1776, the book also gives the original Italian text.  Amongst the colour illustrations are Jacobite portraits, memorial plaques and an impeccably provenanced bust of Henry in the Town Hall of Vetralla, which are overlooked in other Jacobite literature. The diaries record how Henry travelled in immense style and luxury, showering his hosts with luxurious gifts and receiving equally sumptuous tributes, accompanied by a large number of the recorded seventy-six members of his “family” (his servants, or court, of high and low degree.)  I can thoroughly recommend this book as one that gives a lively account of the regal style in which Henry comported himself, and a delightful account of little-known contemporary Italian towns and lifestyle.

As well as giving an insight into 18th century travel, the diaries contain invaluable information about 18th-century dress, church ritual and a cardinal’s routine. Churches and towns visited are described with great detail. Of special note are those of Orvieto and Florence and the Uffizzi gallery. The author, who is an historian and journalist, gives informative annotations – for example, as to whether churches and families mentioned still exist – allowing the modern reader to link past with present.

Signed copies  are available directly from the author.   18 euro plus postage. 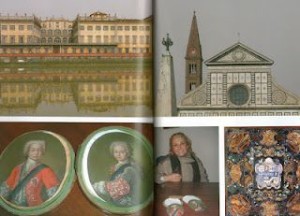 To order a signed copy  directly from the author, click on the  link below.  18 euro plus postage. Payment  options  include paypal, bonifico bancario . Copies are available in Rome at the Anglo American bookshop, Via della Vite, near Spanish Steps. 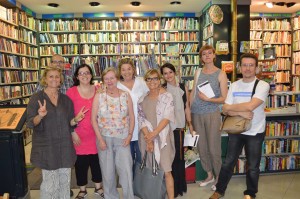 Travels to Tuscany and Northern Lazio 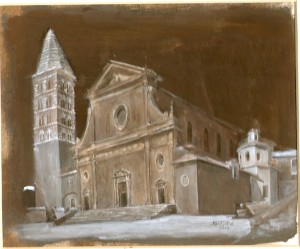 Travels to Tuscany and Northern Lazio

Conferenze internazionali per “Travels to Tuscany and Northern Lazio” 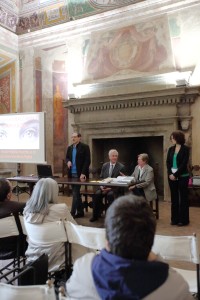