In the spring and summer of 1860 more than a thousand Irishmen participated in an extraordinary adventure travelling to Italy to fight for the Pope, Pius IX in a little-known chapter of the Risorgimento, the Italian unification movement . 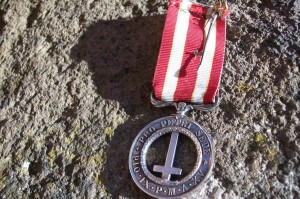 Pro Petri Sede medal given to  some of the Irish volunteers

This expedition has been called “The Last Crusade” because the volunteers’ motives for giving their arms, and a few their lives, were of a religious and patriotic nature. They made up an Irish Battalion named in honour of St. Patrick and fought courageously under the papal banner in all four of the principal engagements of the 1860 campaign: at Ancona, and Castelfidardo in the Marches and at Spoleto and Perugia in Umbria.

A deep  gratitude towards Pius IX for his help during the days of the Great Hunger  (1848-49) was still felt in Ireland while the centuries-old tradition of Ireland being “married to the Church” prompted many to enlist to protect the Pope and the church’s temporal domains then threatened by the armies of  Savoy  King Victor Emanuel and of Garibaldi.

Fighting for the Pope  also meant a chance to fight as Irishmen, and not as British subjects, just as the ”Wild Geese” had done for monarchs in Spain, Russia, Naples, France and Austria since the 17th century.

Prior to 1860 Pius IX and his counsellors had had several doubts concerning the enlistment of Irish soldiers. One was the cheapness of wine in Italy which, they thought, might prove fatal to the Irish. The other was the laws  of England especially the Foreign Enlistment Act, which forbade the recruitment of British subjects to fight for foreign heads of state.  But by January 1860 Pius IX had changed his mind owing to the seriousness of the situation in central Italy and his emissary, Count Charles MacDonnell, an Austrian officer of  Irish descent, secretary to Field Marshal Prince Nugent and a papal chamberlain, set out for Ireland to commence the organization of the volunteer movement.

A Dublin Committee was formed  to stimulate monetary subscriptions and coordinate the volunteers on the Irish end. After Count MacDonnell ‘s visit a spate of patriotic poems and articles appeared  and there was no turning back the tide of enthusiastic volunteers. Spirits were also ignited by the sermons and speeches pronounced at  meetings held all over  Ireland in the early months of 1860.

Besides farmers and working class men there were doctors, graduates of military academies, a bishop’s nephew and twenty members of the Cork police  who resigned their  well paid posts to serve in  the Pope’s private army.

Travel to Italy was tricky due to the Foreign Enlistment Act but many loopholes were found allowing the volunteers to embark. A few signed letters in Belgium in the name of the Grand Prior of the Order of Malta who was Field Marshal Laval  Nugent. They could also legally enter the papal service as policemen or gendarme. Most of the men were accompanied by priests  and called themselves pilgrims, emigrants or workmen . By secret routes they travelled through Belgium, France and then  Austria where officers of Irish background met them and they received a first military training.

Other groups went by sea from Marseilles and landed in Civitavecchia.  Gregorovius described the “eggs and spinach” coloured uniforms of the Irish he saw in Rome  in the spring of 1860 but in reality only a few officers had the time (and money) to have these  tailor made for themselves before the war was declared in September.

An Austrian Archduke had five hundred greatcoats made and delivered as a gift to the Irish and a thousand muskets were given at nominal price but when drilling began, some tall  Tipperary farm lads had to try and stuff themselves into temporary, second-hand uniforms designed for much smaller Italian soldiers.  Just thirteen days before the outbreak of war the Irish still lacked necessities such as belts, haversacks, shirts, underclothes and shoes not to mention 200 muskets and the green uniforms they had been promised. 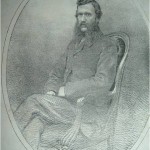 Major Myles O’Reilly who led the Irish in Italy

English spies were doing all they could to discredit the Irish Brigade and there was sabotage by  Italian employees  who sympathised with the unification forces. Spies accosted the Irish in Rome and in Spoleto with passports, money and positions on English ships as inducements to desert.

By September 11th the Irish Brigade was still divided and two nights before the attack on the Rocca of Spoleto, Major O’Reilly wrote: “The night was spent by the Irishmen chiefly in dancing and singing; no authority could get them to go to bed, they were so excited at the prospect of fighting”.

Only  5 copies  of “The Irish and English in Italy’s Risorgimento”  are left.   A new edition in Italian  is planned for the summer of  2020.  NUOVA EDIZIONE  IN ITALIANO  è IN PREPARAZIONE.  SI  PUO PRENOTARE  COPIE SCRIVENDO  A maryjanecryan88 at gmail dot com

Go to Books page  to  read more and order your copy. 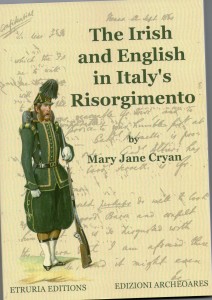