Home » History » Ireland in 1787: as seen by a Venetian ambassador 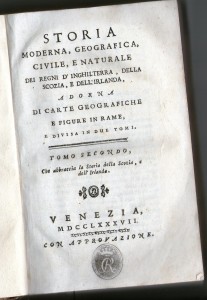 In  March 1975 while browsing in an antique book shop near Castle Sant’ Angelo in Rome, I  came across  two leather bound volumes  containing fascinating  descriptions of travel in England, Ireland  and Scotland  in  1787 .

Modern, Geographic, Civil and Natural History of the Reigns of England Ireland and Scotland  is a revealing chronicle written  by a  nameless Venetian ambassador  and printed in 1787 with the “ Approval of the Republic of Venice”.  The anonymous agent dissected the customs, idiosyncrasies and life style of  the northern islands poking fun at the weather, food, superstitions  and language.

Ireland, England and Scotland were not unknown to Italian travelers for they had been explored and mapped out by a several  Italian cartographers including Venetian Thomaso Porcacci, who in 1567 printed a  map of  “Hibernia “ lying on its side in his The Most Famous Islands of the World.

Here are  some  excerpts  from the book,  translated from Italian, describing the customs and mores of the Irish people 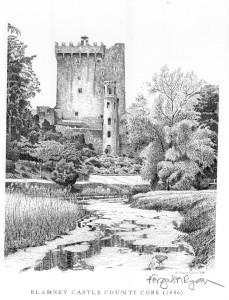 On Love and Marriage

As far as the customs are concerned it is easy to distinguish the high born Irish of illustrious family and brought up in the cities, from those that live in the countryside, the villages and the mountains. The former live in the English way and speak that language and are in every way civilized like the other gentleman of the English reign. But the others live in an almost barbarous way and obstinately speak only their own ancient language.

Among these people can be found some who do not contract marriage according to the law but according to their reciprocal promises and then they live together in complete freedom. If one or the other is then not happy of the cohabitation, with as much ease as they were joined, they separate and the woman looks for another husband, and the man for another wife.

It is noticeable that in the miserable way of living of the country both the sexes are very inclined toward love, this stems from the bad education and perhaps also from the license they have of marrying with such facility and at their changing, dividing and remarrying.

The mothers do not want to take care of bringing up their children because they do not want to stay too long without the pleasures of matrimony: for this reason there are wet nurses who bring up the children and see that they do not lack any of the necessities of life, but little care is given to their spirit and soul, therefore they come out badly educated. Also the same education is given to the boys and to the girls.

Those brought up by the same wet nurse consider themselves like brothers and love each other more than they would their own natural brothers and their whole family.

When the new moon appears they kneel down and pray it to leave them in the good health they are in. They have a sort of veneration for wolves and believe that they are safe from them while they are praying.

If a woman asks for fire on the first day of May, they send her away swearing, thinking her a witch who will use that fire in the summer to make enchantments and rob them of all their butter.

In order  to make their cows’ milk more abundant they think it is enough to plant a green tree in front of the doorway on the first of May.

They love their horses to excess and every time they mention their horses, they add, “God bless them” and spit over them if they are present. 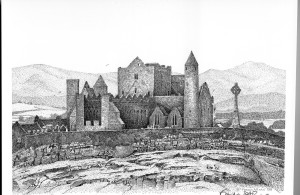 On health and the weather:

The humidity of Ireland seems to be the reason why one rarely hears thunder or sees lightning. Also sicknesses are not very frequent as they could be since the men live to a great age and never suffer from scurvy or fever which occurs in other places where the air is humid. The plague is seen rarely and leprosy no longer reigns as it once did.

It was once noticed that the ignorant and hungry Irish once ate salmon with no distinction in all times of the year. Now this fish, during the time that it deposits its eggs, is sick  and its body is covered with blisters and black marks and will make anyone who eats it become sick too. When the English took over the island they forbade with severe penalties anyone to eat salmon during that time and the leprosy gradually diminished so that at present it is hardly seen at all.