Here is a “cheat sheet”  to help with dating and  understanding   the ages of different monuments, buildings and works of art you will see in Rome and other parts of Italy.

The coat of arms are a visual representation of each  reigning pope.

The pope’s family name is given at the top, the dates of his reign at the bottom  as well as the name  taken by  each pope.

The most   famous  (or infamous) is probably  the  Spanish Borgia pope Alessandro VI, with the original “red bull”.

The Della Rovere pope Giulio II  is denoted by the oak tree (rovere) which is seen especially in the Civitavecchia, Vetralla and Viterbo areas.

The dragon of  Gregorio XIII Boncompagni (responsible for the Gregorian  calendar ) marks several palazzi and monuments in Vatican and the city of  Rome.

The Borghese family also had a pope, Paolo V  and the Barberini  pope Urbano VIII ‘s bees can be seen on the  baldacchino in St. Peter’s basilica. 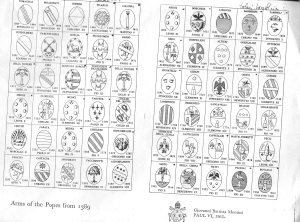